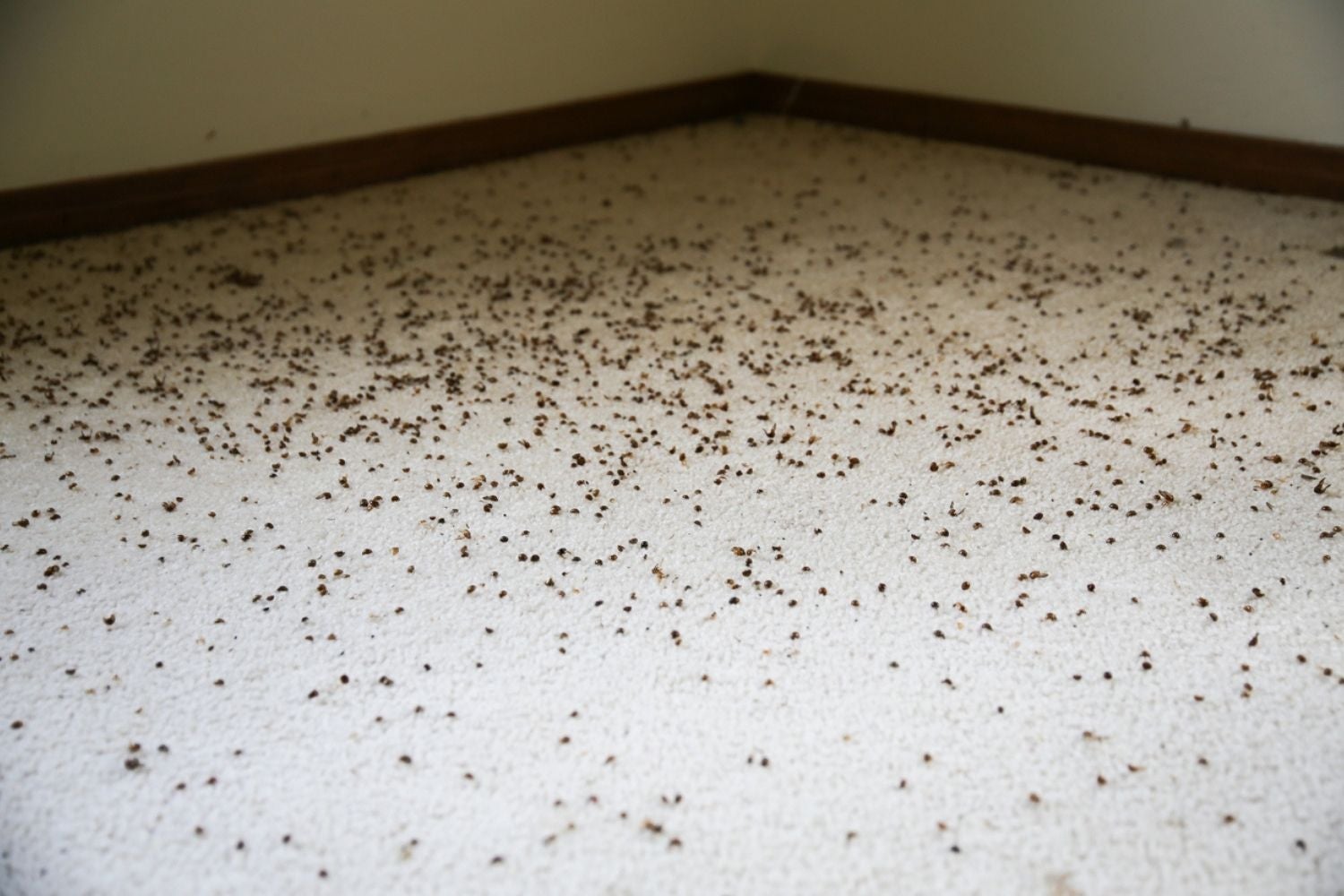 Honestly, it’s not a good sign to detect pests at home. If you find carpet beetles or found indications of these pests, take action immediately rather than ignoring them. Apply our effective methods, or to avoid the hassle, hire a pest control expert also known as carpet beetle exterminator.

Carpet beetles, as the name suggests, may cause damage to carpets. Other goods made of wool, fur, silk, and feathers are also eaten by bugs similar to clothing moths. The larvae can eat keratin, a fibrous animal protein found in these materials.

Let’s look at how you can get rid of carpet beetles!

Damage caused by carpet beetles is sometimes confused for clothing moths, even though the two are completely different pests. Adults are oval-shaped beetles (1/16 to 1/8-inch) with varying black, white, brown, yellow, and orange mottling shades. For their part, carpet beetles don’t eat woolens or other fibers when they’re adults. When they show up on window sills in the spring, it indicates that an infestation may be present in the house. About 50-100 eggs are laid by female beetles in or near sensitive materials. A wool rug placed in a closet may be an apparent breeding site, but other locations (such as baseboards, air vents, and ducts) may be less evident.

Wool, felt, hair, silk, feathers, and leather are among the animal-based materials that carpet beetle larvae like to feed on, as previously mentioned. These include sweaters, scarves, hats, jackets, blankets, carpets, pillows and comforters, upholstery, and ornamental things like toys and taxidermy mounts. When objects are kept in closets, chests, and boxes, the larvae may be seen feeding on the fabric folds (hem, cuff, etc.) in the hems, collars, and cuffs. Rugs that are vacuumed regularly are less likely to be attacked than clothing and blankets often used. More often than not, rugs and carpets are contaminated on the edges and undersides.

Read this Too: Types of Healthy Foods: Everything You Need to Know

Carpet beetles may lay their eggs inside, but they can also infest the nests of birds, mice, and other insects, which is why they are so dangerous. When an adult female carpet beetle deposits her eggs, the carpet beetle’s life cycle starts. Females may lay up to 100 eggs after mating near sources of light, and the eggs develop into larvae in seven to 35 days. Even in the absence of nourishment, larvae may live for many weeks.

Depending on where you live, carpet beetles pupate for a varying amount of time before emerging as adults in the spring or summer. It takes carpet beetle young ones between nine months to two years to mature into adults, whereas adults only have a few weeks to live.

Steps to avoid a recurrence of carpet beetle infestation following eradicating the bugs from your house. Vacuuming often and using boric acid or indoor pesticides on an as-needed basis can keep carpet beetles at bay. Adding mothballs or cedar to your storage containers will help prevent carpet beetles from infesting your garments.

Deterrents of the Carpet Beetle

Keeping carpet beetles out of your home is still a top priority for you. It is possible to reduce the number of pests in your house by doing routine cleaning tasks like taking out the trash, vacuuming, and washing clothes, towels, and pillows regularly.

Adding barriers to keep out carpet beetles is as simple as following these extra steps:

Infestation through thermal means. Insecticide sprays are typically ineffective against carpet beetles because the bugs hide in materials that sprays cannot reach. Contamination and staining make its usage on museum items, clothes, and other items impossible. A home, chest, or walk-in freezer can frequently disinfest such objects more successfully. One week of freezing temperatures is required to eradicate carpet beetles and clothing moths from afflicted articles. Within 72 hours, all life stages may be eliminated using freezers that can reach minus 20 degrees F.

Carpet beetles and clothing moths may be effectively killed by freezing. Polyethylene sheeting and duct tape should seal plastic bags or polyethylene sheeting before freezing. After chilling, this avoids the formation of frost and ice on the item and condensation when it is removed. Objects that have been frozen should be allowed to thaw for at least 24 hours before being handled again.

Other methods to get rid of carpet beetles

The insecticide should be sprayed in locations that cannot be cleaned or washed.

Carpet beetles should be included on the label of any pesticide you use. Apply it according to the manufacturer’s instructions to any textiles that can’t be cleaned any other way. Insecticides should only be applied in specific areas of the home, not liberally sprayed throughout.

As with any cleaning method, you should only use it in areas where lint is a problem, such as beneath or around the edges of carpets or rugs, closet walls where garments are kept, and in the cracks and crevices of your home. Spraying clothes or beds is not recommended. When using the pesticide, always use gloves and protective gear. Take a break from the area while the pesticide is dispersed in the air, and wash your hands afterward.

Infested locations, such as attics and wall voids, might be hard to get into, but boric acid can help. Alternatively, you may manufacture a spray out of boric acid by combining one tablespoon of boric acid with 2 cups of boiling water. Stir until the powder is dissolved, and then sprinkle it into tight spaces using a disposable spray bottle. Because of its bleaching properties, do not use boric acid on dark-colored fabrics.